In the previous post we saw how to install a ngin-x server. One of the capabilities that have ngin-x is to be a powerful proxy server, used as a load balancer. In this post we will see how to use it to balance the load of two WebAPPs (could be as many as were necessary). This scenario presents a feature that requires slightly modify the normal procedure for this operation.

We start from a linux machine with NGIN-x installed, as seen in the previous post.

In addition we will create two simple WebAPPs, with a message that differentiates each of them, for example, as shown in the following images: 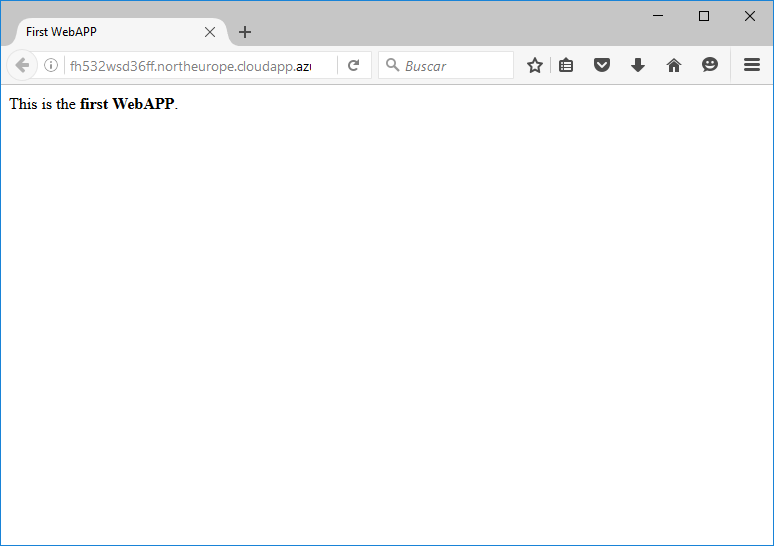 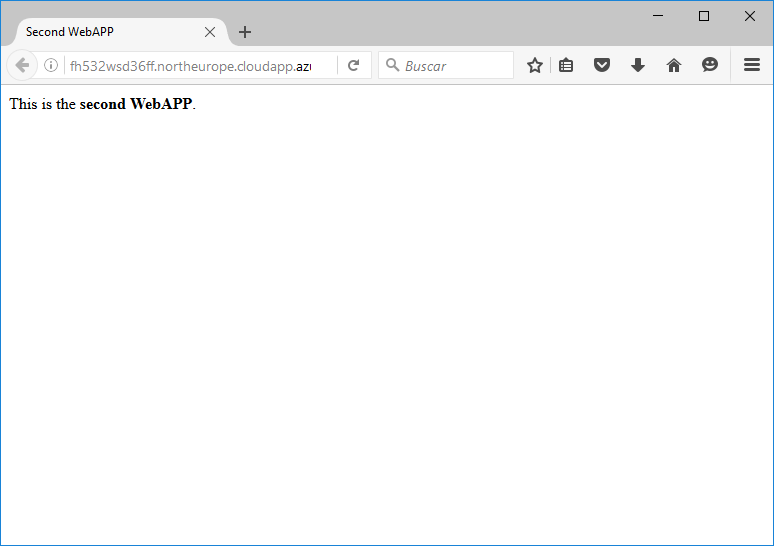 Then we will set up ngin-x following the normal guidelines. We entered the linux server console and edit the configuration file with nano for example:

And modify the script so it looks like the following code:

We save the code and restart the NGIN-x service:

The above script would be the normal way to balance two WEBs with ngin-x. But if we tried now we get the following error: 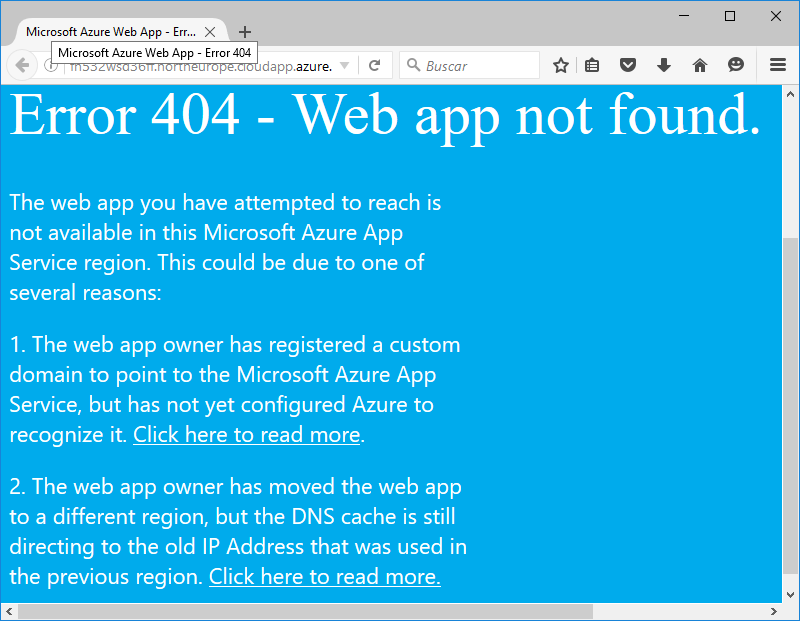 This is because Azure App Service uses cookies to ARR (Application Request Routing). You need to ensure that the proxy passes the header correctly to the WebAPP so that it identifies the request correctly.

For this we edit again the configuration file and leave it as follows:

In this script we apply a double proxy, so that we balance the input against the same ngin-x, attacking the ports 8001 and 8002, which headed to the webapps, but adding to the header the real WebAPP url.

After recording the script and restart the ngin-x service, if we navigate to the ngin-x server, we see that we are balanced from one to another web without problem.

To learn more about balancing modes available on ngin-x you can see this link.

In this post we will see how to install nginx on a Ubuntu Linux 16.04 LTS virtual machine on Azure. This is one of the best HTTP servers and reverse proxy, and also an IMAP/POP3 proxy. It is open source.

Let’s assume that we have deployed the Linux virtual machine on a basic state. Otherwise, as summary, the steps are:

– Create a virtual machine from the gallery with Ubuntu 16.04. You can see my post about creating Linux VM.
– Change the default ssh port. You have instructions to do it in Azure in my post about it.
– Upgrading the system, connecting to a console session and running:

This step is always recommended before installing a package (except production servers with previous production packages, that you have to consider whether or not it is convenient).

As we will install an HTTP server, if you have got a previous http server like Apache, you have to uninstall it to prevent conflicts.

Once the machine is ready to install nginx, from the ssh console run:

And finally we start the nginx service with:

Check that the service is active with:

It provides service information that will be similar to the following screen: 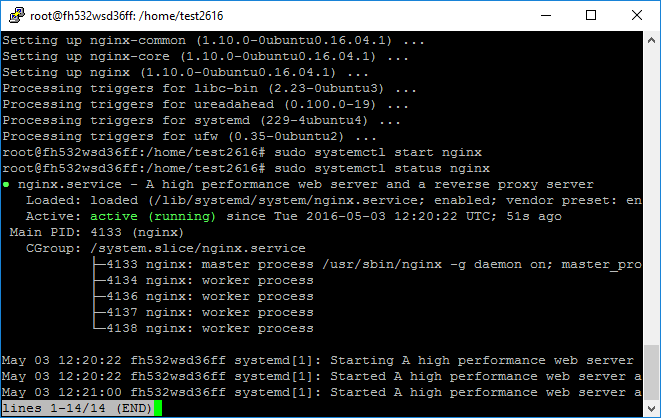 Now, we have installed nginx, with its default settings to port 80. If we go to the machine, trhought that port, the next page appears: 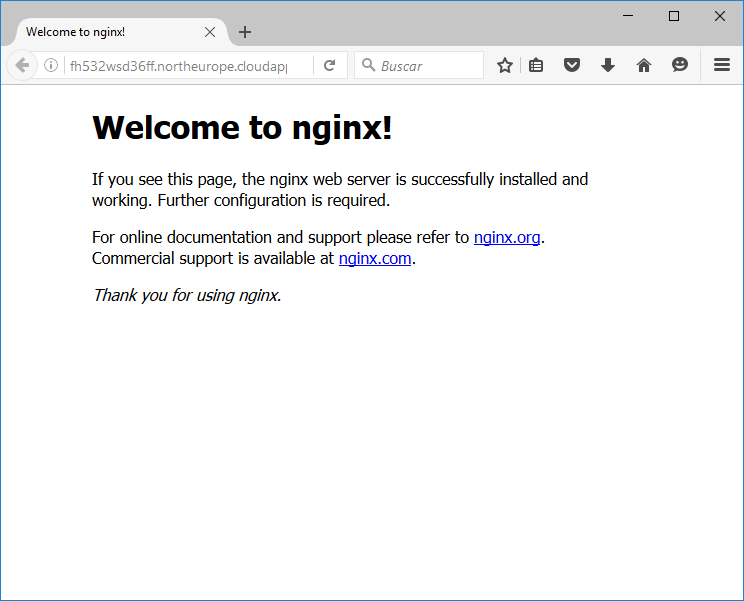 For more information about nginx you can find it on this link. 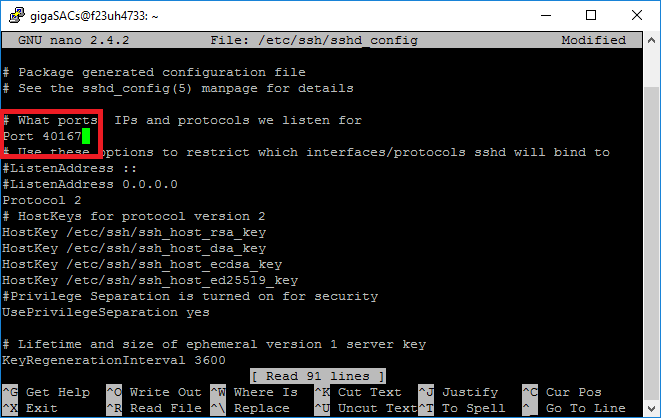 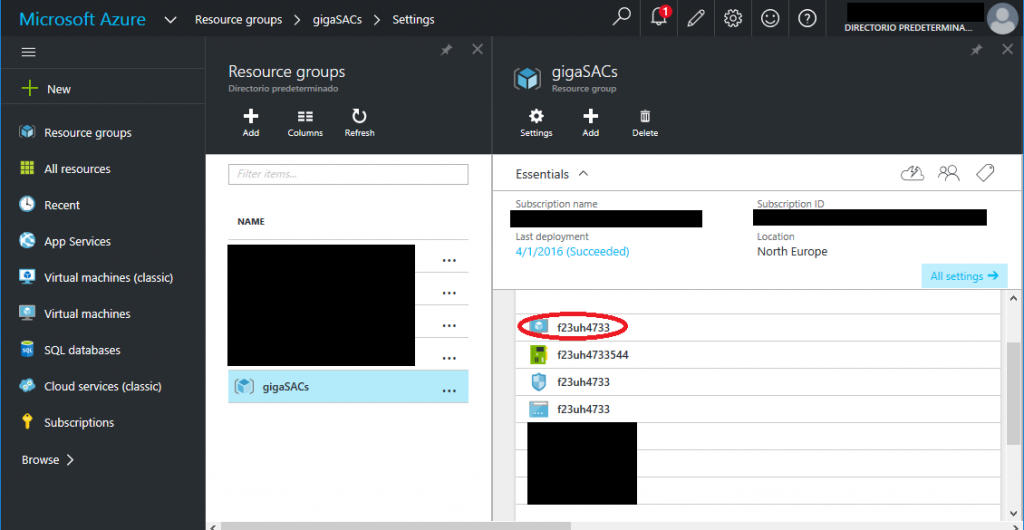 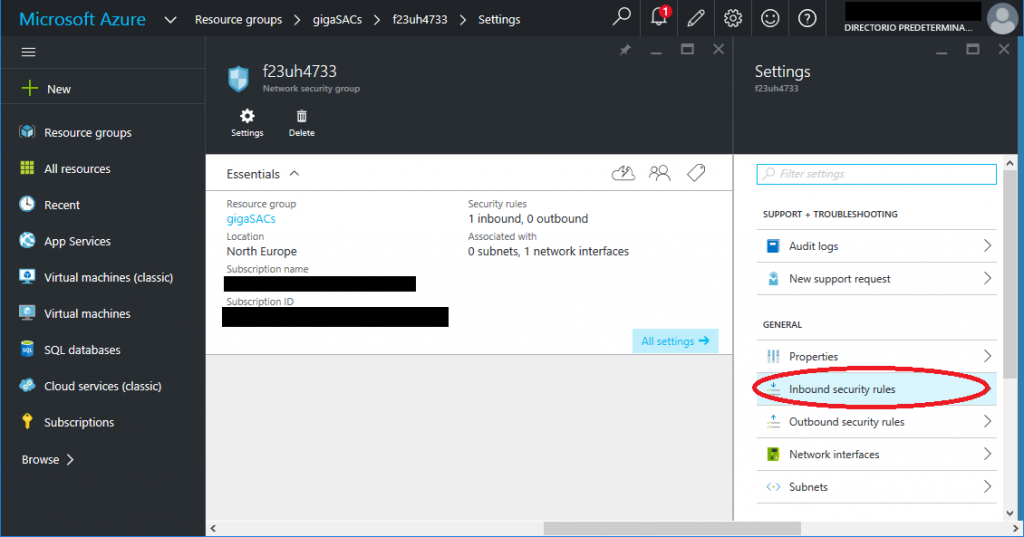 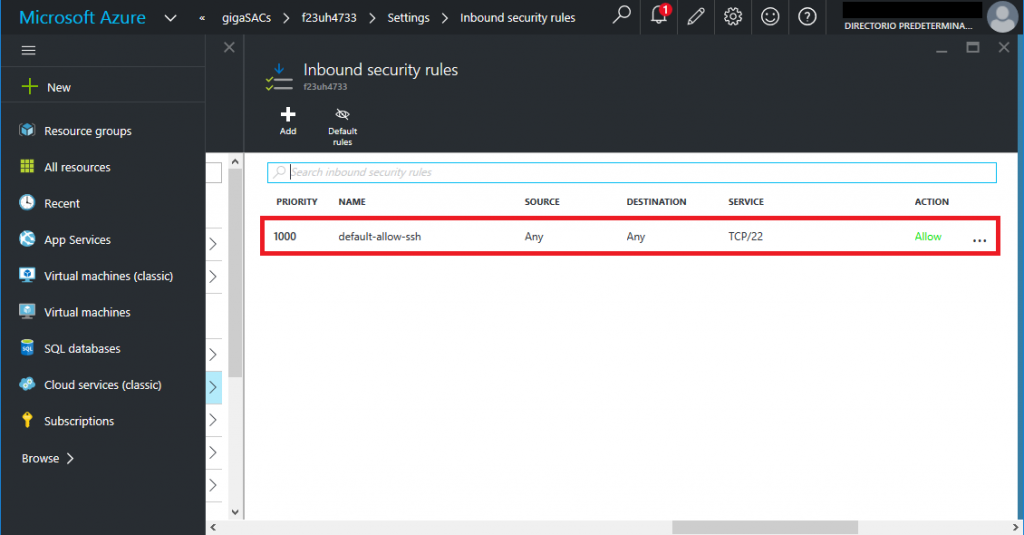 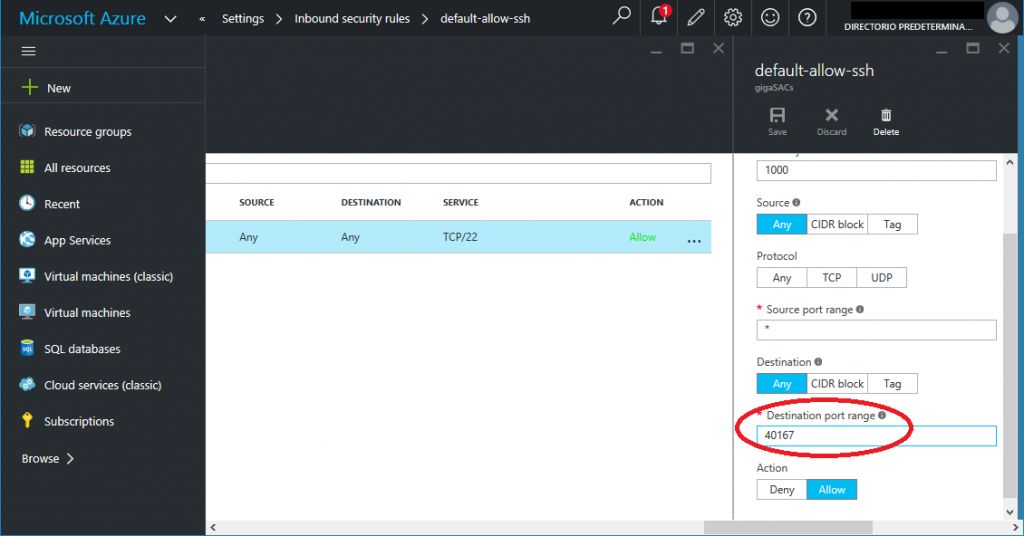 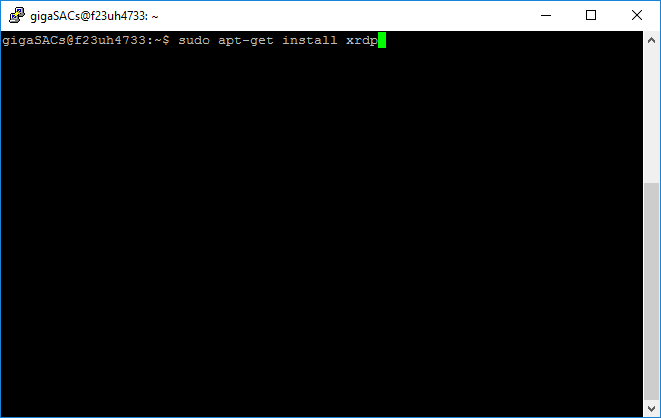 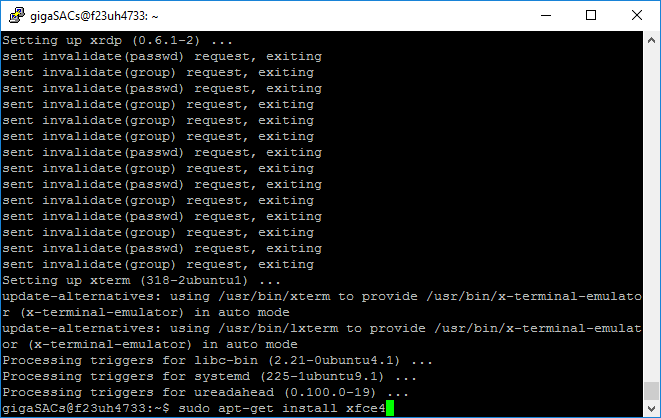 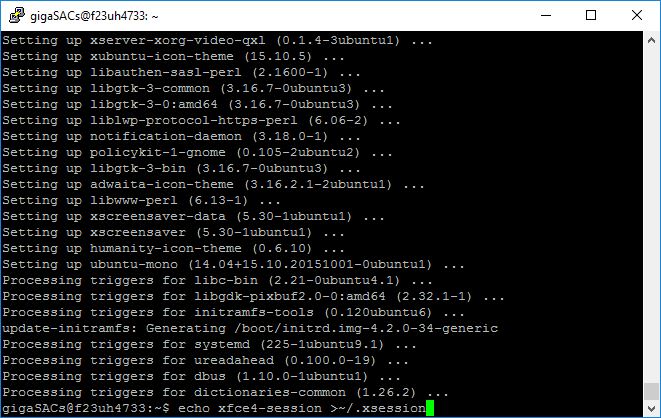 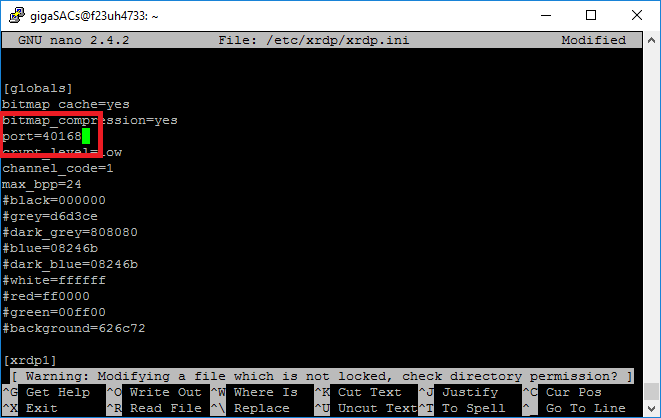 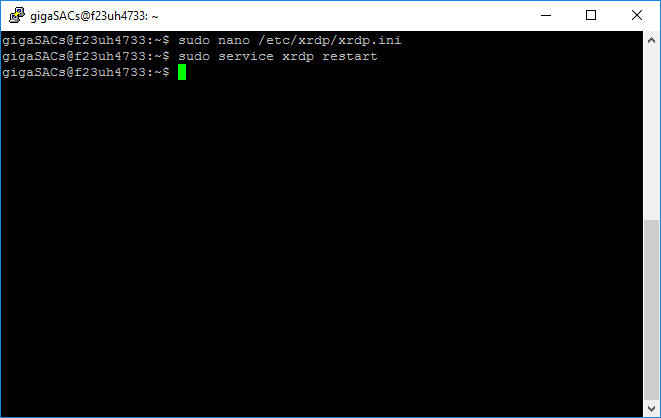 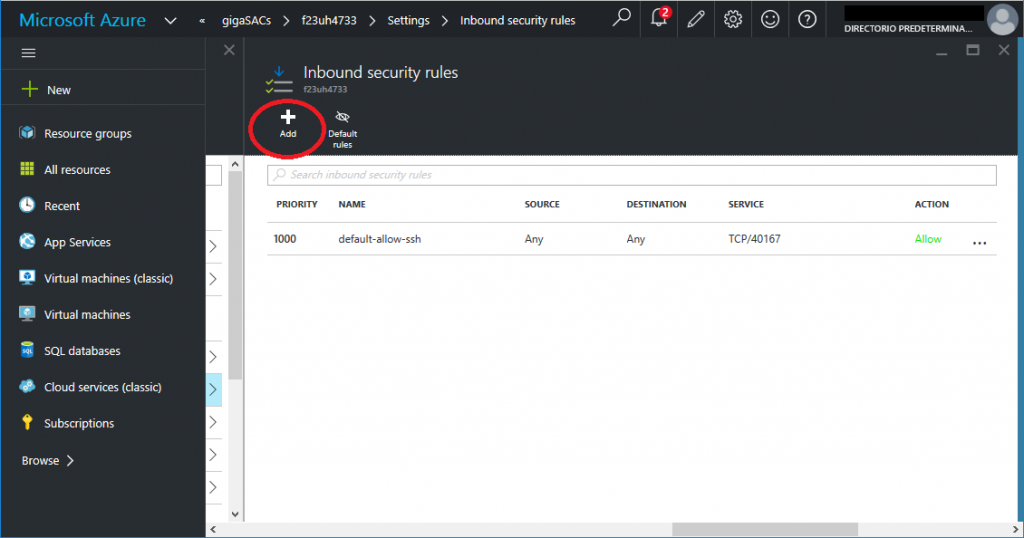 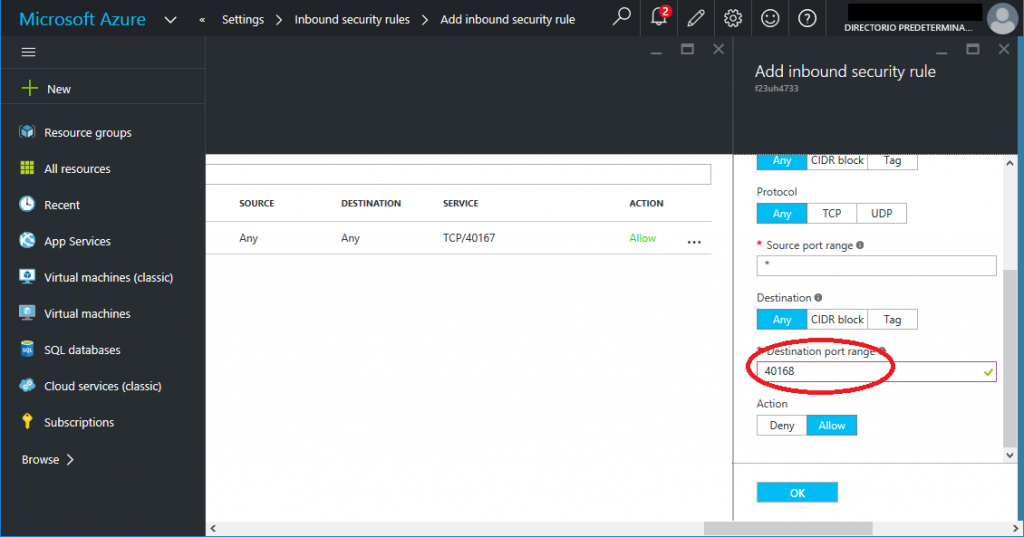 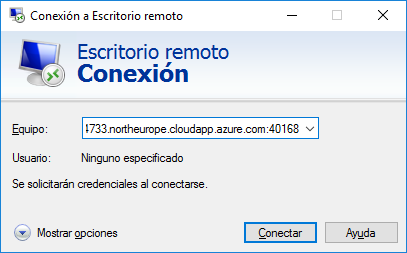 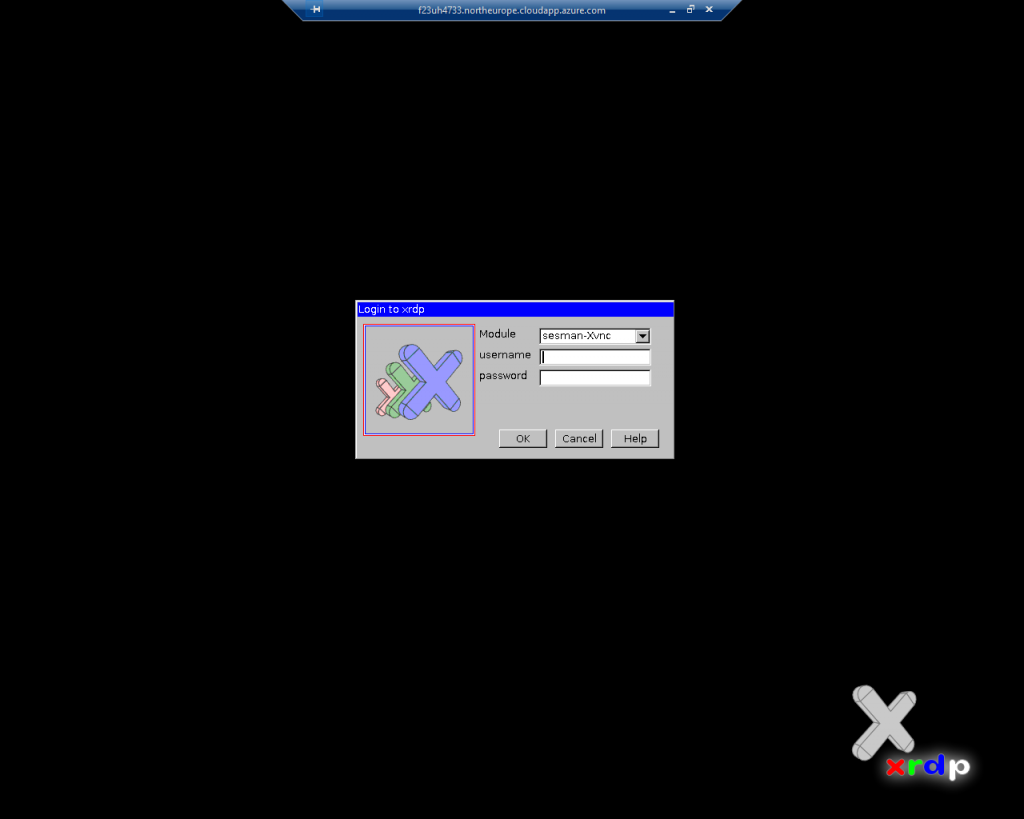 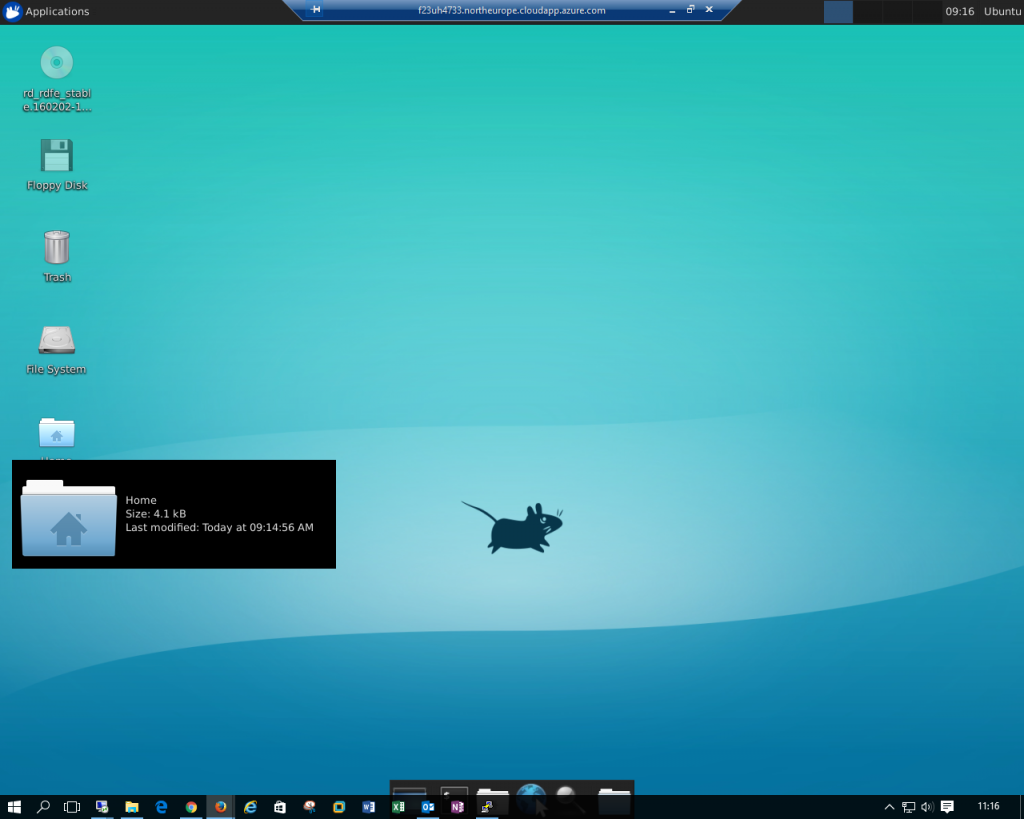 Within the Azure marketplace we have multiple images ready to deploy. Among them are several distributions of Linux created by several companies, with several preinstalled packages if necessary.

Let’s see the entire process of provisioning a virtual machine (IaaS) with an image of Canonical Ubuntu Server 15.10.

We entered our Azure subscription and click on virtual machines:

We search and select the image Ubuntu Ubuntu Server 15.10 Canonical:

The description of the VM image is showed, and we can choose whether we want in classic mode or resource manager. We will choose resource manager. You can see the differences on this link. Press create to start the process of provision:

Now, you can fill the basic data of the virtual machine, with special attention to the geographical area of deployment and the resource group to which to assign. Select the location closest to where you want to give the service or one where you have all your virtual data center.

With regard to the resource group, remember that everything you bring inside will not restart simultaneously in the mantenimience operations, so its use is for high availability situations.

In this step you will define the root user and password, so please assure that the data is correct.

After filling all press accept.

You must now select the size, which defines the cost of the machine. Choose the one you needed depending on the estimated use. The DS series, with SSDs are suitable for LAMP services for example.

In this step you will configure additional options, such as network, storage type and others. When you finish, please press accept. If you do not yet know these concepts in Azure, the default options will be fine to start.

A summary of the process is presented and a final confirmation is requested. If all is well, press accept and begin to supply the machine. If not, you can go back to correct it.

In the notification area you will have a notice of the process progress, as well in the main panel.

Once the deployment is complete, which may take about 5 to 10 minutes, you can connect via SSH with a client like Putty, using the public IP of the machine and against port 22, with root user that was defined in the basic options in step 5.